How does the Brazillian elections work, exactly?

I'm glad you asked (you did, I promise) because I can infodump for an hour. 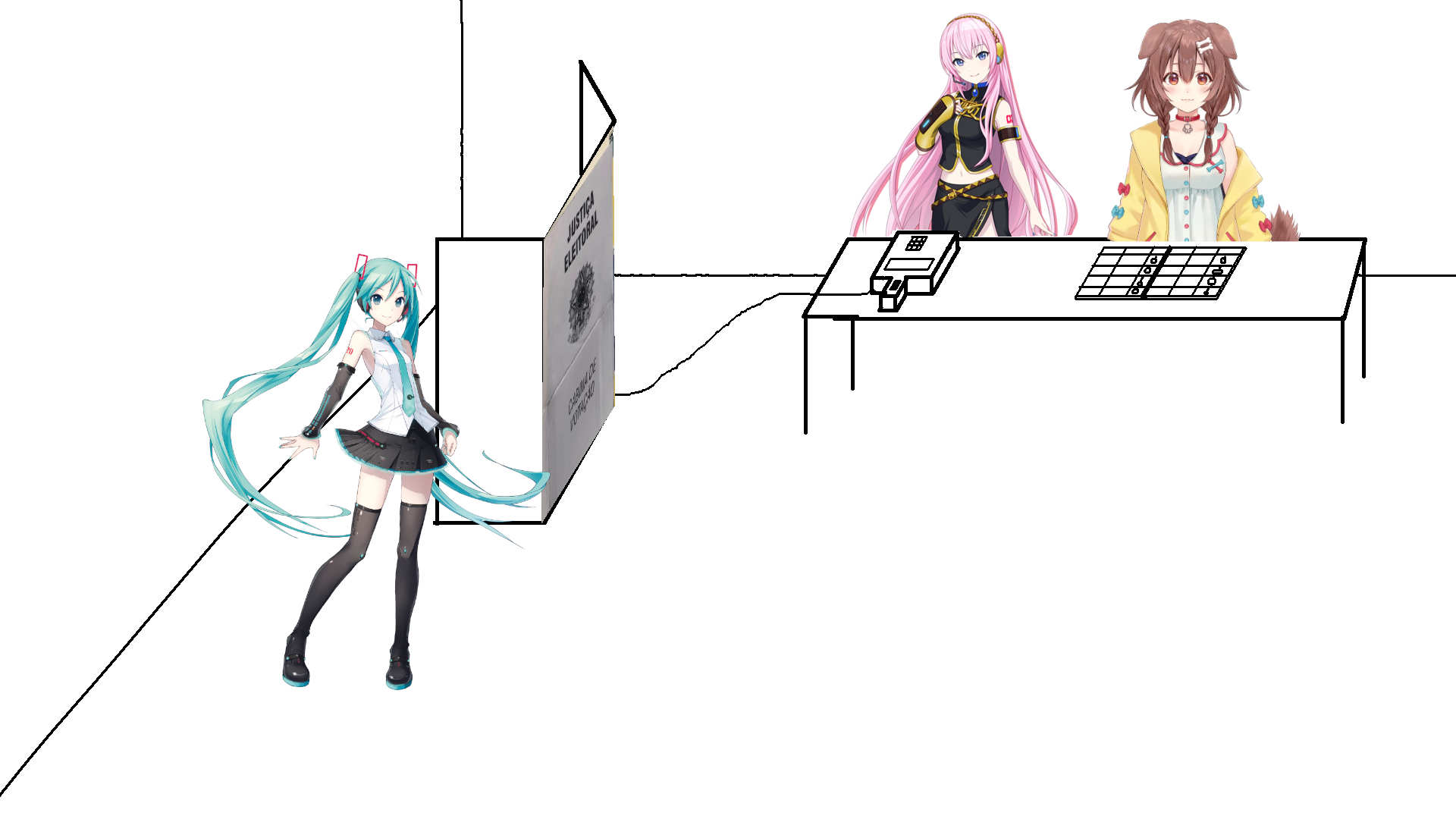 Local elections happened in November 15th 2020, so what better day to start writing a blogpost describing how it works than today.

This is going to be a technical explanation of how things work. So I'm skipping many pre-election and post-election processes. I'm going from candidate loading until vote counting.

In Brazil, we have the TSE, Tribunal Superior Eleitoral, it translates directly to the Supreme Electoral Court. It is the practical creator and maintainer of the voting systems used around the country. After TSE comes the TREs, Tribunal Regional Eleitoral, translates to Regional Electoral Court, and are the courts that actually collect the data from the voting machines back to TSE (more about that in the future of this post).

Every Brazillian citizen between 18-70 years of age must vote. Citizens above 16 can vote. Not voting when you must vote means that you must pay a fine to TSE (if the fine is not paid, there are other things as well, such as being unable to emit a Passport, being unable to be admitted to a public university, etc). To be able to vote, a citizen must create their Voter Card (my translation to Título Eleitoral), and as of recent years, the Voter Card creation process involves taking a picture of the voter and a record of their fingerprints (more on that later).

In the creation process, the citizen is asked which place would they want to have their voting take place. I don't know the criteria, but places can become unavailable as they might be full of voters. After your selections, you are assigned an Electoral Zone and an Electoral Session. The hierarchy goes as follows: State –> Location (city, suburb) –> Zone (number) –> Session (number). Schools are the most common place to be Electoral Zones.

After candidates for the respective year's positions are selected, they are loaded in blank voting machines. The loading process is done via a specific kind of USB flash drive with a specific plastic shell to guide it into the back of the machine (preventing people from trying to jam it in, then switch sides, then attempt again, the usual USB problem). After that is done, another USB flash drive (of same structure) is loaded in, and the spot it's on is locked, as that flash drive will contain votes.

The election days are selected by TSE, composed of a 1st and 2nd round. 2nd rounds happen when a candidate for a major position (such as mayor, president, or governor) does not reach a majority (51%+) in a location with more than 200 thousand voters. 2nd rounds just have the 2 leading candidates from the 1st round.

On election day, the mesários (which are voluntary workers for TSE/TRE to manage the election) assigned for a specific Electoral Session, with relevant managers, do the starting ceremonies for the voting machine the respective TRE gave them. That ceremony happens before the actual hours of the election day (election day happens from 07:00 (7AM) until 17:00 (5PM)), so between 6-7AM.

The setup ceremonies involve testing the machine's hardware and making it print a report that it does not contain any votes inside. That report is called the Zerésima. You can see examples of them on the TSE website.

After those ceremonies, the session is ready to accept voters.

When a new voter comes in the voting session, they must have some form of identification of thsemselves and their “voter selves”. For the former, that can be done either via TSE's digital voter card app (recommended during the pandemic), the E-Título (only works for voters that registered a picture of themselves) or any government-issued ID document (passport, national ID card, driver's license). For the latter, either E-Título or their voter card works.

Upon showing their identification, one of the Mesários checks the identification provided on the session's book. That is a physical paper notebook possibly contains a picture of a voter, their name, and their voter card number. When a match is found, the voter number is told to the Mesário operating the Terminal. Depending if the voter had their fingerprint registered or not, the Terminal requires the voter to put that in its reader. (This bit may be disabled entirely, considering COVID. As an example, I was not asked to put my fingerprint in for 2020's elections, even though I did in 2018's)

The Terminal controls the voting machine in terms of “starting a voting session”, “ending the session”, “stopping a vote if the voter didn't finish their vote”, “requesting accessibility options”, etc.

After voter identification, the voting machine is now ready to receive the vote.

The voting machines are all manufactured by TSE and TSE contractors and sent out to TREs around the country in the months leading to the election.

Here's a picture of it:

You can use a little simulation TSE made using highly advanced JavaScript (note: fully portuguese)

Voting machines do not have any networking equipment (Wi-Fi, Ethernet, Bluetooth, etc), its only form of communication is with the Mesário Terminal, and a power cable. Voting machines have batteries as well, to handle remote locations.

The voting machine runs Linux with a highly customized userland made by TSE.

Inside the voting machine there is the Registro Digital do Voto (RDV, Digital Vote Registry), that file can be thought of as a spreadsheet where the columns are the political positions, each row is a voter, and each cell is a vote for that political position. The vote, when casted by the voter, is randomized amongst the other votes, emulating a physical ballot box being shuffled around. Portuguese high-level explanation by TSE.

After a single vote

After the voter has cast their vote, they're asked to sign the notebook and the Mesário gives them a piece of paper, taken from the notebook itself, which is the proof that voter actually voted. The voter can now leave the session, and the next one comes in. This is the cycle that happens until 5PM.

At 17:00 (5PM), all voting sessions are due to stop soon. If there are any remaining voters in the queue, they must be attended (which means the session might stop after 5PM), but no new voters will be attended (so the actual place closes its doors, but the sessions inside are still open).

After all voters went through, the Mesários issue the command to make the voting machine stop. When that happens, it prints out the total amount of votes that were casted on that session, as in, “candidate X got N votes”, “candidate Y got M votes”, etc. This report is called “Boletim de Urna”, and I'll keep its translation as Vote Report.

The Vote Report is generated from the RDV file cited earlier, it is printed by the voting machine up to 11 times. The first copy is a check to see if the printer of the machine is operational, then 5 required copies, then 5 optional copies that may be requested by political party representatives, the media, or the Ministério Público. Other reports printed are the Justificative Report, and the Mesário Identification Report.

All 5 required copies of the Vote Report and the Justificative Report are signed by the President of the Voting Session, the Mesários, and other Inspectors. Mesários must sign the Mesário Identification Report.

The Vote Report MUST be publically available, either through physical means, where one of the copies is put on the voting session itself, or through digital means, on the TSE's website. The Vote Report contains a QR code which means you can cross-reference the tally made by the voting machine with what the TSE received.

Another copy is given to one of the Inspectors in the session, or the media, or a representative from Ministério Público. Remaining reports are sent back to TREs.

After all of those are finished, the voting machine displays that the session is over, and can now be turned off by the President of the voting session.

The Vote Report, while it is sent to TREs, is not the way votes are processed. The voting machine writes all of the information in its Vote Report on the locked-up USB flash drive. The seal and lock are undone, with the President for the session's supervision, and all flash drives for the Zone are sent physically back to TRE.

On the TRE, those flash drives are loaded for final counting, their data is sent back to TSE via a separate network (network is provided by Embratel), and from there, results are distributed via online/TV to everyone in the country. Here's the website for the 2020 Local Elections.