A bit of history

In the current LavaTech infrastructure, we maintain a single application server that runs Proxmox VE, and from there we slice it up containers for most of our applications, with some (like the ejabberd instance powering a3.pm) having their own dedicated servers.

Proxmox VE provides both LXC containers and KVM/QEMU virtual machines so we can use specific operating systems. One of the VMs provides FreeBSD CI infrastructure for the Zig project. The architecture for it is composed of two VMs: one that runs the Sourcehut instance on Alpine Linux, and another running FreeBSD for experimentation─such as compiling LLVM if needed─and also to update the Sourcehut instance's FreeBSD CI image.

That was the first proper contact with FreeBSD I had, lol.

Since then, I have been experimenting about with NetBSD and FreeBSD, and one of the latest experiments was installing FreeBSD over a serial line.

There wasn't a production need to do it, as we don't have a project that needs thousands of FreeBSD VMs, but the serial line idea helps us because we wouldn't need to go the whole way through Proxmox VE's web admin panel to get a VNC session. In theory we should be able to just SSH to the host and manage that VM directly, without needing SSH inside the actual VM.

The experiment was succesful and here are my findings.

Proxmox provides a way to attach to a VM that has a serial line, all documented here, so the bit that I had to dig through was FreeBSD's own interaction with the serial line.

I found a random blog post that helped in explaining the general idea of FreeBSD-install-in-a-serial-line, but it isn't directly applicable because this process uses USB installation media, and that's something that I did not want to research, because our mental model to creating VMs describes creating them with ISO files/CD/DVD, and Proxmox doesn't quite provide an obvious button for that.

After creating a modified ISO file with the process from the FreeBSD manuals (and from that blogpost, as I don't know if comconsole_speed="115200" is a default, I assumed not), it was straightforward to add it to the Proxmox VM image library, and boot up the VM. After doing qm terminal ... I got the bootloader messages, the bootloader screen, and was able to have it process my input to boot (it would automatically boot either way, but pressing a button and seeing things happen is a good feedback mechanism). 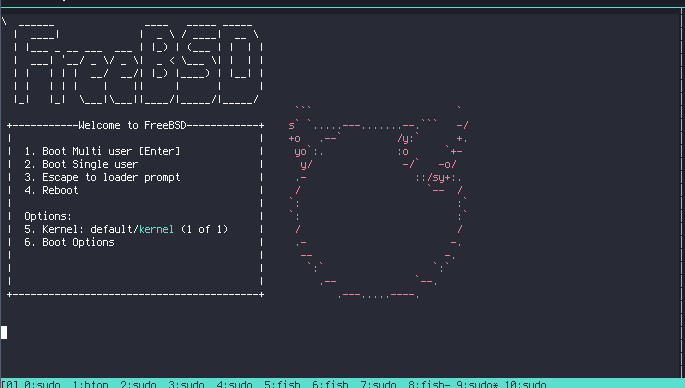 While it was booting though, we have found an anomaly.

I typed cd9660:/dev/cd0, hoping it would work, because I didn't understand the issue that was happening (Ave cited that maybe something related to ISO repacking was doing something bad here, but I didn't investigate it further), sure enough, it worked, and I got to a selection of which terminal am I on so that the installer can draw its boxes!

I recommend you to use xterm when possible, because ansi and vt100 can be hard to use and lead you to type wrong things in the wrong places.

Serial line can get clunky, especially if you try to just tmux(1) inside of it (I was a reboot away from being unable to boot due to a broken rc.conf, as vi drew things on the terminal in the wrong ways), but it is enough to curl my SSH keys to a user, and use it inside a proper terminal.